Never was there an episode with so many nonchalant nipples as this one. Bless its heart. 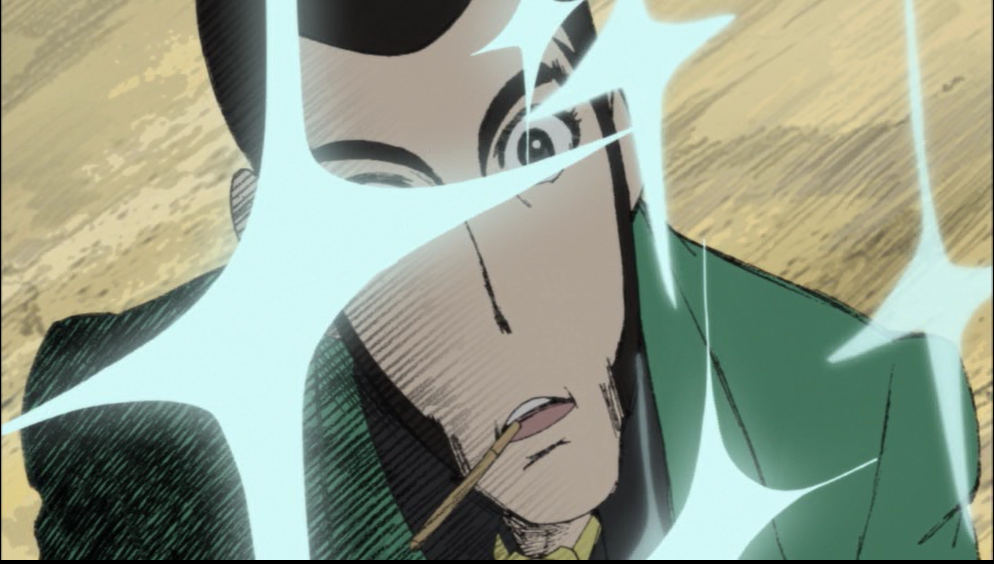 Episode Specifics: Jigen and Lupin meet for the first time in a recently unearth pyramid, both of them looking for a magnificent treasure called the “Laughing Peacock” – Lupin so that he might have a chance with Fujiko, and Jigen for want of a purpose in his post-assassin life. It might be, as they say, the beginning of a beautiful friendship.

There face-off moments in this episode, particularly the duel-that-wasn’t during the final scene, carry much the same vibe as Jin and Mugen’s duels in Samurai Champloo (a nod, perhaps, given that Champloo was the first series Sayo Yamamoto had a major hand in helping to direct). there’s also a touch of Indiana Jones to the proceedings, though that may be more because those films codified the modern sensibility for booby-trapped ruins than any deliberate homage. Certainly the trap of spiders brings to mind “why did it have to be snakes.”

Lupin Lore:  As might not be surprising for an episode centering on a pyramid, there’s a fair bit of Secret of Mamo here: its opening scene was dedicated to avoiding traps whilst getting to the heart of a pyramid, and Jigen’s trip through the market is staged and filmed in a manner that echoes that film. The giant statues on the way to the treasure were major hallmarks of the underground-booby-trapped tunnels in The Fuma Conspiracy, and Fujiko refusing to leave the treasure behind in a life or death scenario appeared there as well). Add your own caption here. If you can think of one that isn’t sexually suggestive,
you’re a far stronger soul than I

Uniquely interesting is the way that this episode sets up a callback for the finale – while I could put this down in the theme section, it ties in enough to the characters on-going relationships that I’ll leave it up here. One of the complaints I hear now and again is that Fujiko’s forward momentum in the finale grinds to a halt at one point so that Lupin can step in and give a pep talk while also explaining the plot (I know this because it was one of my complaints on the first watch). And while I’d still entertain it as a fair point of criticism, this episode does set up a precedent for that pep talk by way of the scale conversation. It’s not exactly subtle, but the out of nowhere suffocation and spotlight of the crowd is pretty brilliant
at evoking the ‘trapped’ sensation of Jigen’s psyche

Like Fujiko in the final episodes, by this point Jigen has made the conscious decision to get away from his past but finds himself regressing into his former life. Lo and behold, Lupin comes along to give him a lecture about how the judgment of others is pointless, because they’re already well aware of their own sins and actions – in other words, that their self-determination supersedes a moral code (a dead-on philosophy for Lupin, who by the way seems pretty cheerfully on board with killing despite admonishing Fujiko during their first meeting). 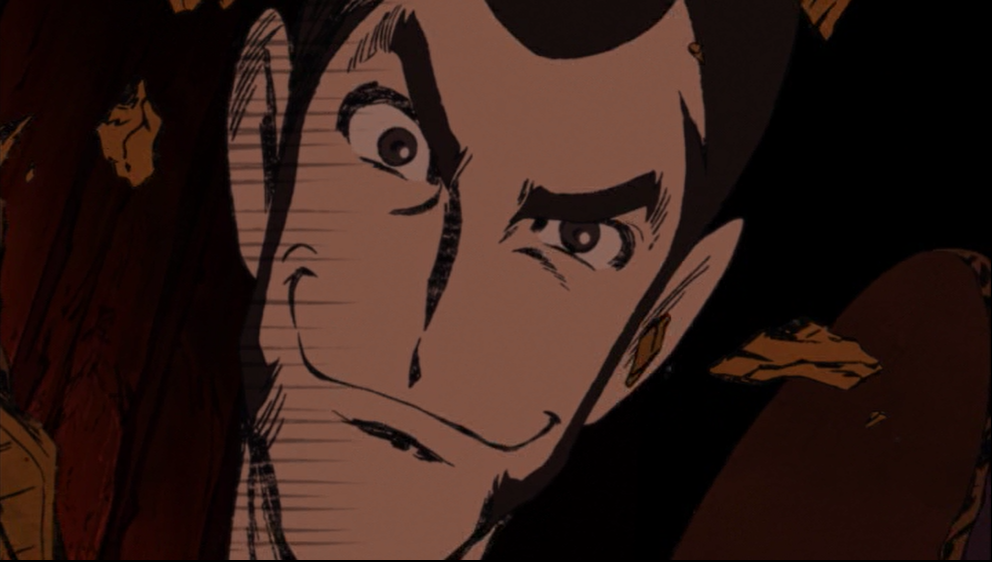 It proves to be the push Jigen needs to truly start over, not so much leading him to the solution but pushing him toward a perspective he was unable to see before. Lupin is an inciting point of inspiration for both characters, and likely the most important person in both Jigen and Fujiko’s lives in later series. It’s worth noting that he gives a speech of similar tone in Green Jacket when Goemon joins up, setting a nicely woven precedent. It shifts the exposition point of the finale from ‘well, he is technically the franchise title so let’s put up with it,’ to ‘this character is possessed of a particular insightfulness, that despite his dangerous whims and selfishness, draws others to him and inspires undying loyalty.’ Suddenly Owls: Less a meaningful contribution than a somewhat bewildering token cameo, because now that the show’s determined we should notice the owls they will be EVERYWHERE. If one stretches quite a bit, we could take this as a moment to question exactly how many of Fujiko’s heists are fabricated by Almeda/Aisha, creating a thorough Truman Show-like reality, and how much is simply things they’re effectively twisting after the fact. I really doubt even they would have this kind of far-reaching money and influence, though.

Oscar Watch: In that outfit? He’d get sunstroke in about two minutes (even Zenigata looked about ready to keel over in Mamo). Themes: The topic of the feminine Other gets a bit more coverage in the next episode, but we’re going to be busy with other topics at that point. So, let’s take a look at it here. Both here and in the later series, there’s a recurring concept that women are inherently traitorous at worst and unknowable mysteries at best, an idea that twines its way through many works in the pop cultural mythos (particularly anything involving femme fatales). Simone De Beauvoir, French theorist of the late 20th century, dedicated a whole book to it (The Second Sex, if anyone is interested in reading really choppy translations of French feminist thought).

Put simply, it’s a widely held cultural bias wherein the male viewpoint is the default/normal. It’s the thing to which all other things are compared – in the way that a healthy human cell might be the baseline, say, and a cancerous cell would be the Other. Women, as an entire sex/gender, get to be that Other, unable to define themselves without using language of how they are not men: they don’t have a penis (unlike men), they’re more emotional (than men), they are passive (men are active), and so on. All the old stereotypes give the castoff traits of male characters to female ones, so you get a lot of strong, assertive heroes and shrinking, passive beauties waiting to be rescued. Female characters who were not defined by those defaults, then, become an unknowable Other and, subtextually, a threat (take a minute to count the stories where the femme fatale isn’t a traitor, and then hand in your empty notepad). Women in those types of roles have a way of either dying horribly or learning the error of their ways, and coming to personalities that are more in line with the acceptable limitations of the feminine (for the clearest example I can think of, check out Soma and Marie from Mobile Suit Gundam 00. Bring hand wipes, because you’ll feel a bit unclean afterward).

Fujiko, under the influence of Aisha’s memories, often describes herself as being full of secrets (a phrase Lupin uses toward her in the older works). She’s unknowable even to herself, because in her brainwashed state she wasn’t allowed to set her own definitions. She’s the by-prodcut of Aisha’s memory transplants, which were in turn born of Almeda’s attempts to mold a perfect child bride (all together now, ewwwwwwwwww). Part of Fujiko’s reassertion of self becomes demolishing that mystery, a proud declaration that she knows who she is, and those are decisions she made through no one’s conceptions but her own.