I Believe in Steven (and So Can You)

I adore listening in on the evolution of western cartoons. Dismissed at best and actively reviled at worst, they’ve long been the cultural dumping ground of toy advertisements, Very Special Episodes, and the assumption of an extremely stupid viewership. And while it is quietly ignored, it begins to turn out beautiful pieces like the nourish art deco of Batman the Animated Series, brilliant snapshots of the dying variety format as preserved in Animaniacs, the passionate and rich storytelling of Avatar, and the tightly woven mythos behind Adventure Time’s engrossing surrealism. Meanwhile, in the midst of all that raring appreciation, Steven Universe managed to come along and completely blindside me.

As a brief summary: Steven is a 10 year old boy and the youngest member of the Crystal Gems. The Gems – whose number also include worry-prone strategist Pearl, erstwhile 90s slacker Amethyst, and awe-inspiringly stoic Garnet, are otherworldly guardians who protect earth from various and sundry supernatural threats (and also seem to do a lot of cleanup among the ruins of their rather dwindled race). But Steven is as new to the gig as we are, not yet sure how his powers work and half-human to boot (his mother, Rose Quartz, gave up her physical form in order for him to be born).

Thus do we follow Steven’s adventures around the sleepy Beach City, which always meet at the juncture of mundane and fantastical (with at least one anime homage an episode thus far). The show is perhaps the most refreshing thing I stumbled on all last year, one that continually surprised me with its energy and earnestness while also showing off charmingly rounded designs and a pastel-tinted palette.  But what continues to surprise and delight me is how very different the show is, and how nonchalantly it treats that difference.

We can all agree that diversity is good, yes? That media meant for the masses should perhaps have appeal to people from all walks of life, if for no other reason than because it opens a multitude of storytelling opportunities (and, by means of a well-developed and relatable character, exposes people to new ideas or viewpoints they might not have otherwise considered)? Optimism tells me most people would go for this general assessment, anyway. Often I think this leads to what people might dismiss as ‘token’ casting (rightfully or not) – you have a well-meaning writer who wants to expand their cast but isn’t quite sure how to do it naturalistically, so whatever is ‘different’ about the character (race, religion, sexuality, disability, etc) becomes a sticking point. The writer is so scared of doing it wrong that the character ends up defined by their Difference rather than having it be part of a complex personality, and that can quickly slide into stereotyping and all the nastiness that goes down that road (this is all a grossly simplified and perhaps overly cheery analysis, but I stick by the bones of it). The broader tendency to impart a social message at the expense of character/plot to lead to what people call Message Movies (whether that moniker actually applies or not).

Meanwhile, here are just some of the things that SU contains: two major African American characters, female heroes with practical outfits and distinct personalities, a single father (who falls somewhat into the deadbeat dad stereotype, but mostly because of his total inability to help with Magical Stuff – he and Steven have a very warm relationship), a male lead who doesn’t think hanging out with girls is UGH SO TERRIBLE, a girl who sometimes shapeshifts into a manly wrestler just for the heck of it, a teenager with gages who is in no way a disaffected threat to society, and a hipster blogger who got lost on the way to Austin. The show calls attention to exactly none of these things, because it’s too busy having adventures about giant monster bugs and killer peat moss. Certainly you could look at all those elements and quite correctly label SU a progressive show. But its progressiveness is most apparent in how nonexistent its need to show off is. ‘Of course we have these things, why wouldn’t you?’ As if one were asking about cool robots in a mech show.

Even when it’s doing something ‘common,’ there’s something special about it. Take Steven’s friend Connie – while tween TV has perfected the ‘opposite sex besties’ formula for maximum marketing appeal, there will always come a time when the writers decide it’s time to play that card. You know the one. ‘Oh, they’re such good friends. Do they liiiiiiiiiiike each other?’ Which isn’t necessarily bad, but is often crammed down the viewer’s gullet with an irritating lack of subtlety – character A starts having feelings, and gets all snappy and awkward while B is confused; or there’s the manufactured intimacy moment to clue the audience in, or everyone and their dog in fiction land needs to drop a hint or two about how compatible these two clearly are for each other. And particularly if it’s a boy lead/girl friend character, there’s always an aspect of The Girl – this is The One, guys. The only female they ever seem to interact with on a friendly basis, and who is the fixation of all the feelings. 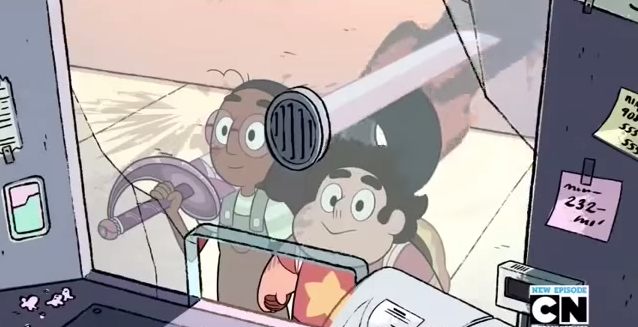 She’s an homage to Anthy and takes fencing, his name is Steven Rose Quartz Universe.
I cannot handle the number of amazing Utena references in this show

Not so with Steven and Connie. They have things in common, they like each other’s company, and they go on adventures together. The Gems nonchalantly treat having Connie over as they would any friend. They can rely on each other. And sometimes, with no Important Moment closeups or awkward blushing involved, they hold hands. It’s unbelievably sweet, and it preserves the affectionate ambiguity of close childhood friendships that are so often (in boy/girl cases particularly) shoved into adult-shaped boxes (if I hear one more adult ask a four year old if their friend is their little boyfriend/girlfriend, I may throw something).

Meanwhile, the series is also gifted with lovely music, strong character writing, the aforementioned lovely art, and a boundless imagination. It reminds me of nothing so much as 1996’s Cardcaptor Sakura, probably the most famous series by manga group CLAMP (and certainly their most successful adaptation). The goal behind CCS, according to one interview, was to allow us to see the world through Sakura’s eyes: a world framed by an innocent and accepting nature completely antithetical to many modern works. CCS gave us a character who warmly turned friends into enemies, took her friends’ strange supernatural occurrences in stride, reacted to her brother’s best friend becoming her brother’s boyfriend by giving the traditional ‘if he makes you cry I’ll beat him up’ speech, and never gave up in the face of terrifying odds. It’s a heartwarming series on all accounts, and Steven Universe is the first truly pure recapturing of that feeling I’ve been able to find. If people like Sakura and Steven are our hope for the world, or if they inspire just one ounce of that same friendly and determined openness in others, I think I feel pretty okay about the future.