Of the many things that are shaping up to be intriguing about nascent auteur Sayo Yamamoto’s work, foremost among them is her portrayal of women. That is to say, her works are populated with female characters from a Technicolor spectrum of personality and purpose, varied and deftly shaded and as real as any male character would be expected to be. Take Michiko & Hatchin, her first outing as a series director – it might start as one-woman-army Michiko’s journey to reunite with the man who left her, dragging that man’s child (Hana/Hatchin) along for the ride, but that’s nowhere near the point. In fact Hiroshi, the missing man in question, is so far removed from the story that he eventually starts to seem more myth than being. By the end, he’s less the happy ending that our main characters thought they wanted and more an unattainable dream that they’d convinced themselves would solve everything. Yup, Hiroshi is Sayo Yamamoto’s Prince Charming. 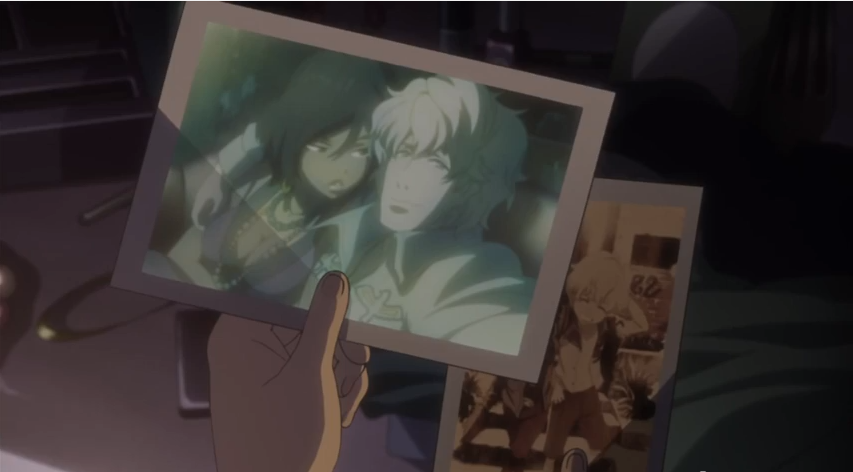 Michiko might be faking that disgusted look, but I’m not

The first time we see Hiroshi we don’t even know who he is – Hatchin runs away from her despicable foster family, and while walking down the road she fantasizes about someone coming to rescue her. While that person is never named and is framed in soft-edged sunlight, he definitely bears telltale similarities to Hiroshi’s design – the poof of hair, the lean build, the hat that he’s wearing at the end of the series. Right from the get-go, we are clued in that Hiroshi is a literal ‘dream man.’

More than that, he’s a downright legend: he looks just like the romantic lead on tv’s most popular soap opera, he’s featured in a news story holding revolutionarily large tomatoes (despite not having invented the formula himself), he rose to the head of a gang, commanding the respect of the underworld; he was the backbone of support and belief that Satoshi needed at his lowest point, and he was a spacy, gentlehearted lover that perfectly balanced Michiko out.

And for Michiko, Hiroshi isn’t just her ideal man – he’s the reason behind everything she does for a major chunk of the series. She snatches up Hatchin and later protects her because she’d promised to protect Hiroshi’s child (and probably figures it would put her in good standing with him, too); she breaks out of prison, travels hundreds of miles and gets her hands in all kind of nasty gang dealings trying to get back to him. And yet he seems to become more and more unspecific in her thoughts about him – early on there are several lengthy flashbacks about her relationship with him, as well as the photo up above. That dies down to flashes of his expression in key moments, and that dies down to words. What she thinks, what she’s sure Hiroshi would expect her to do. By that point he’s as unreal as any storybook prince Charming, a fictional fix-it that girls push themselves to live up to in order to unlock the solution to all their problems: to a bike that keeps breaking down, to a kid she doesn’t know how to relate to, to a frustrated sex drive, and a place to belong and feel safe. Hiroshi is all those things in her mind, and early on we’re encouraged to believe it with her. Of course he wanted her to follow after him, because that’s something bold and dramatic that would happen in a love story.

As the story goes on though, Hiroshi seems more and more like an excuse. What we learn about him becomes more and more distorted, like a game of telephone, until we’re left only with the idea of Hiroshi rather than the man himself. Even Hatchin, who was determined to be the grounded one of the pair, started to say things like ‘that’s just the kind of guy he is’ – without having met him at all. Flesh and blood becomes a hazy fantasy, an out, and we as audience grow more and more uncertain as to what our leads are chasing.

While Hiroshi’s a distant goal of what Michiko thinks she wants, while the real joys in her life come from learning to be there for Hatchin. Their bond (somewhere between sisters and parent-child) becomes a cause in it of itself, born because of their association with Hiroshi but eventually independent of it. It’s both a subtle trick for the characters and for the narrative as a whole – we come in told that this is a Love Story, about a woman going through hell to get her man back. What it is instead is a tale of the bonds between women, so often downplayed or shoved to the side if it’s even remembered at all. 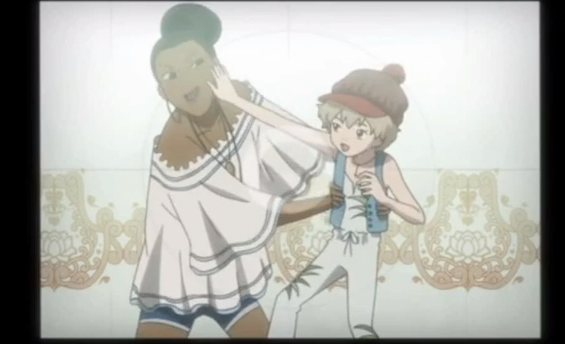 The point of no return – either your heart’s sold forever, or the story has nothing for you

But the even greater trick the show pulls is that not all of the men are evil or stupid, something that can be easy to do in what would commonly be thought of as “the Female Empowerment Narrative.” There’s as many varieties of male characters as there are female – not just crooked cops and child traffickers but kindly boys and brave, helpful actors. For all the improbable highway battles and gun-fu, the people populating Michiko & Hatchin have a feeling of reality to them (you can’t call it subtlety when you have a dreadlock-wearing cross between the Joker and Unibomber running around, but I believed every character within the world’s rules). Well, every character feels real except one.

And we come back to Hiroshi again, the prince charming and key to everything. The narrative isn’t content to let him become a legend, a vaguely defined ideal that we quickly realize is semi-positive (for bringing Michiko and Hatchin together) but ultimately meaningless in the reality of their lives. No, in order to kill the myth of prince Charming Michiko has to attain what she thought she wanted. The story could’ve taken another easy out here – many a missing father/brother/lover story has done it before, where the idolized figure is found to be crude, abrasive, and terribly easy for the audience to hate. How simple, we think in those circumstances, for the characters to realize they were better off without this person all along!

But Hiroshi isn’t mean. He isn’t even cruel. He’s just selfish. He seems happy to see Michiko, returning her embrace. He agrees to take custody of Hatchin, swearing that he’ll make up for the years of father-daughter bonding that he missed out on. But then he runs off a few months later, having forgotten all about his promise in favor of his own momentary happiness (the show’s very careful not to make Hiroshi a symbol of the ills of romantic love, for many characters along the way are chasing after that – instead, he’s a very specific kind of escapism). And that’s kind of the Prince Charming mythos in a nutshell, isn’t it? It’s about finding someone perfect, with no flaws or complications of their own, who can rescue you from the hardships that pain you. Someone who can fill the holes in your current life and take you away from complicated relationships and responsibilities. But what about the happiness of those you leave behind? What about the joys of fighting to help someone or fix something? Hiroshi represents a nice dream, one that perhaps isn’t even bad in some aspects, or at a certain point in one’s life – he motivates Satoshi to climb the ranks, leads Michiko to Hatchin and gives them both purpose before they’re able to find it in each other and themselves. He represents fire and passion and also immaturity, something powerful that must be let go to reach the next stage of being happy. It’s a tender and well-designed story, a careful sleight of hand that changes perspective and priority without having to cruelly rub our noses in how wrong an immature dream was. Instead, we just realize there’s something better to strive for. It’s a bit like living that way. 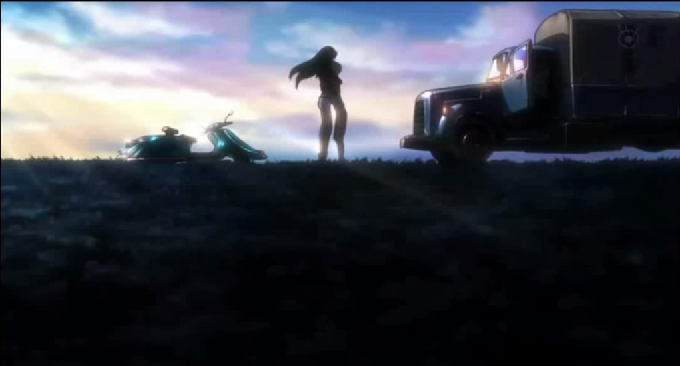 …I still want to punch Hiroshi in the face