Of all the things people were expecting from the Samurai Flamenco finale, a naked marriage proposal probably wasn’t at the top of the list. But I can’t think of a better way to cap off a show that thrived on plot twists both totally out of left field and bizarrely true to the characters and world of the story. It’s not the events of the ending I want to talk about so much (though I pushed back another post on Samurai Flamenco as a whole to stage a discussion on recent events). The show isn’t rare for having romantic tension between its two male leads – KyoAni will tell you that that’s a pretty sweet way to fund your retirement. What’s damned unusual is that they followed through on it, a move so unprecedented that not to talk about it would be to miss a golden opportunity. 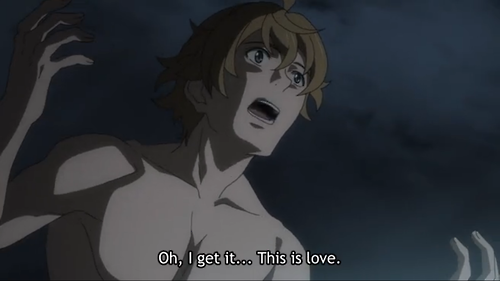 I see that you and the audience are having the same realization, Masayoshi

Would you like to know how rare this overt love confession is? So much that a not-insignificant portion of the viewing audience has tried their hand at arguing that it isn’t a real confession at all, but rather a situational bit of confused-friendship, played to earn the dollars of the Free! audience I alluded to above. I find this fact deeply disturbing. Now, I could talk about a number of things that point to Masayoshi’s feelings as definitively romantic (even if the proposal itself was spur of the moment, as befits the character), as well as Goto’s implied reciprocation: the deliberate visual and scripting parallels between the Mari/Moe (who are explicitly shown to be physically intimate) and Masayoshi/Goto fights and reconciliations, not to mention visual imagery such as umbrella sharing (shorthand for romantic intimacy in Japanese culture, not unlike writing initials inside a heart); the use of romantic lyrics pertaining to the characters’ situation in the epilogue (and deliberately cutting to a second verse to time the lyrics in that way), or the official supplementary material that describes their relationship in overtly romantic terms. Even putting all of those things aside, the show was perfectly clear in its intent from early on – it’s just that no one took it seriously.

I’m going to tell you a romance staple now: if third parties are continually remarking on how well-suited for each other the two leads are, there’s probably a revelation coming in the third act

With all that in mind, it’s fairly mind boggling to see the amount of backlash and attempts to turn the relationship into something ambiguous. What on earth’s going on, you might say, where an overt proposal is painstakingly interpreted as platonic affection?

To answer that, let me step a bit sideways: in the English edition of trans manga Wandering Son, translator and cultural anthropologist Matt Thorn includes an excellent essay called “Transgender in Japan.” In it, he discusses Japan’s cultural outlook toward the LGBT community and the often strange disconnect between the thriving underground BL/GL markets and the relative dearth of LGBT content in ‘mainstream’ media. Simplified, there’s a cultural eschewing going on. Gay characters are fine as flamboyant comedic relief (whether it be the “Hard Gay” macho man or the effeminate okama type) or as unreal fantasy objects in erotic manga, but there’s a distinct discomfort with the idea of including them as relatable, ordinary characters. It’s always someone else who’s gay, never your child or your relative. It’s…well, it’s not unlike the mentality that you find in English speaking anime communities. “Ugh, I didn’t think this was going to be gay (not that there’s anything wrong with that).” Or “I just want to watch a normal anime.” I would wager good money that most of those people would say they have no problem with gay people/romance – just not in Their Anime.

You end up with gay romance stories where the entire universe seems to be made up of one gender, as though the relationships are so precarious and fragile that a single member of the opposite sex might throw the whole thing out the window; you have romances where nonconsensual sex isn’t just common but expected as a means of bringing the lovers together, and the characters fall into stereotypically masculine and feminine roles; stories where the romance almost always makes up the majority of the plot, marginalized to a safe corner with limited budgets where they can be ignored.

And if you venture outside the walled garden of genre romance? You find gay characters who are the comic relief characters, who at best will never get anything resembling a romantic subplot the way straight side characters might, and at worse will be a running gag for the ‘normal’ main characters to be weirded out by. You get villains whose homoerotic interest in the main character is used to add deviancy and threat to the implication of their character. You have whole shows that revolve around homosocial bonds between the main characters while coyly denying the actuality of romantic interest, implying borderline romantic attachment that will attract fans of BL and GL (and more importantly, their wallets) while also being able to tell the ‘normal’ audience, ‘ah, how strange that they’re reading those kinds of things into these heartwarming friendship stories.’

Samurai Flamenco doesn’t settle for implying. It doesn’t couch itself in stereotypes (in fact, it brings up the villain-obsessed-with-hero archetype and then deliberately separates it out as different from Masayoshi’s feelings for Goto). Instead, the anime weaves a story about a dumb, idealistic kid who wanted to be a hero, and who finds himself faced with the complexities of what that might mean. He makes friends, screws up, is brave and funny and sweet, and grows into a mature young man before the audience’s eyes. And then he tells his best friend that he loves him, because being queer doesn’t mean living within the straightjacket of set-in-stone stereotypes. And people have been reacting against that, trying to put the story back into the box of friendship-with-subtext. But there’s no box anymore, and the number dissenting is, perhaps, a bit smaller than the group accepting.

I can’t stress enough, while there’s yet air in my lungs, how important that is. To create stories that have queer characters without the story being entirely about their queerness, to write those characters like real human beings in emotionally relatable situations and let audiences who might not have thought about it realize ‘oh, we’re not so different I guess.’ And if that’s a sappy sentiment it doesn’t make it less true – a phrase that sums up Samurai Flamenco just about as well as anything I can name.

Part of me fears that the show will now be marginalized, in hindsight, as ‘that gay superhero show.’ That it will fade into obscurity, away from the audiences who aren’t already open to same sex romance. That the landscape of anime will return to the mediocre timidity of fan-baiting plausible deniability. But I choose to be optimistic, to marvel that the show exists at all, and to hope that even as a cult phenomenon it might provide a meeting ground for anime of the future to explore (and perhaps more often than the gap that separates this show from the likewise naturalistic queer romance No. 6). With enough time, maybe we can take an open declaration of love between two men or two women (and I haven’t even touched on the Mari and Moe romance, which I found equally appealing and well used as a foil) at face value.

Those screenshots above, where Goto’s teased about having feelings for Masayoshi? Those are common as the day is long in anime. The difference is that Samurai Flamenco followed through on it. Because that’s the kind of anime it is – it might be strange and occasionally nonsensical and never stop for breath, but it is completely earnest in all of those things. It isn’t clueing you into Goto’s feelings or Masayoshi’s disinterest in girls because it wants to sell merchandise. It’s doing it because they’re falling in love, and it wants you to know it before even they do. And to those coming in because they’ve heard about the romance? Stick around for the heroics and aliens, too. I promise it’s a ride well worth your time.

Tagged as: Analysis, Anime, Culture and Such, LGBT, Samurai Flamenco