Want to start at the beginning?

I come into this week’s Green Jacket episode knowing the best joke on the subject has pretty much already been made (and we shall come to it in due time). Still, we must persevere. This is the first episode of a trend that winds its way here and there through the late episodes of Green Jacket, where we switch from ‘Lupin wants the thing and engineers a crazy plan to get it’ to ‘fuck this other criminal guy, let’s show him up because he makes my profession look bad.’ Welcome to “Keep Your Eye on the Beauty Pageant,” which you can watch here.

Also, Jigen’s been taking his Watson pills again, so being an adorably dressed parrot is pretty much the extent of his involvement in this episode.

Jigen, master of disguise: wearing a different colored beard on top of his beard

The episode starts with a bit of exposition, facilitated by the temporarily lobotomized Jigen (hey, remember when he was the guy who did all of the research and whom Lupin went to when he needed information for a job? Shut up, no you don’t): So there’s this dude (who has a name, but let’s not kid ourselves into thinking you’ll need to remember it) who was once a very famous art thief, and it turns out he has the Mona Lisa and a bunch of other famous paintings and this never made the news somehow; said art thief is getting old, and he’s using the upcoming ‘Miss Global’ pageant to sell off the paintings he’s acquired over the years.

The justification for all this is that he can’t take the paintings with him when he dies, leaving me to conclude that he’s pioneered some kind of science-y soul coat that is powered by money, thereby making it more useful to a dead person. So, theoretically this is about the paintings, but that’s more of an afterthought than anything. Really, Lupin just doesn’t like this Art Thief and his vampire-fang mustache. 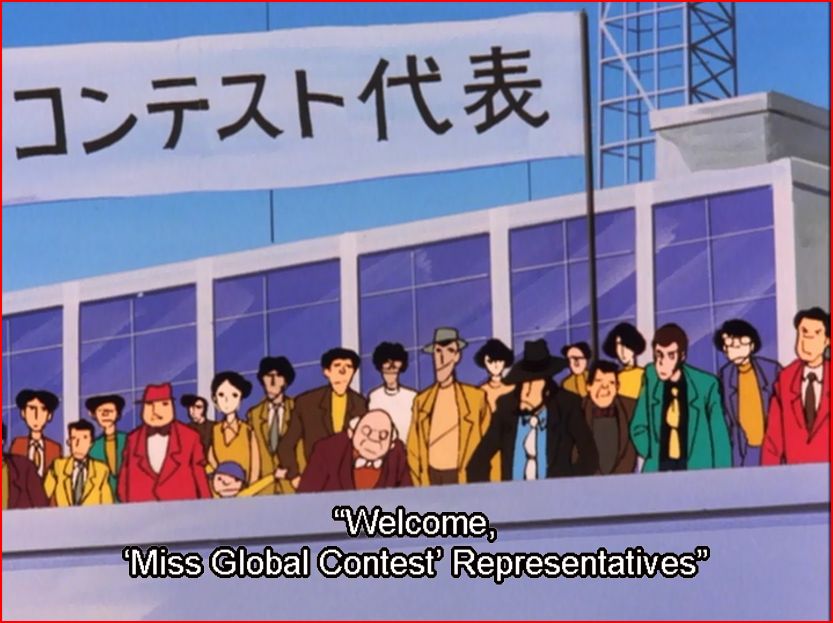 Hey, does anyone think the one conspicuously not-Japanese guy might be a bit suspicious?
No? Okay, then

Fun fact: despite the very obviously Japanese welcoming committee up there, this contest looks like it takes place somewhere vaguely like Hawaii. We’ll chalk it up to really devoted nationalism for the Ms. Japan.

Our heroes make their way to the hotel where the pageant is being staged, helpfully bringing up a plot point that will never appear again:

I completely buy this. A famous criminal mastermind is casting for something illegal?
Wow, think of the exposure!

There are many questions to be asked about a moment that is ultimately completely pointless:  what are the actors for? We never see anyone outside of the main four working on this job, unless of course the contestants are secretly in on things (which will make the third act rather less uncomfortable); exactly how many minutes would Lupin have had to stay in LA before being overwhelmed with potential actors; what the fuck is up with the door on that car, it is opening the wrong way; no seriously, what?

I struggle over whether this was a plot device that was just kind of forgotten, an elaborate conspiracy underpinning the legitimacy of the thief’s heisting capabilities a la Sherlock’s “The Reichenbach Fall,” or if this is Lupin’s weekly foray into being Kind of a Dick by deliberately lying and withholding details because it’s funnier that way. While I’m thinking about this, the episode’s moved forward about four plot points, so we’d better catch up.

When Lupin says “I hired actors” he actually means “we’re the actors, and we’ll be pretending to be the TV crew for this event.” The revelation of this newfound role is so profound that it may have caused Jigen to ascend to a higher plain of existence, beyond what we pathetic mortals are able to perceive.

And now, the highest achievement in joke for this episode

The next part of the episode is more expositing – Lupin and Jigen carry on a fairly short conversation about what the angle might be for the art sale, while changing location no less than three times. At this point I begin to suspect that it is actually Lupin’s desire to be an actor for the day, and he is using Jigen to help put together a demo reel of glamour shots. Behold:

Such beautiful, pouting lips. And so close to pulling off the Gendo Ikari

I can’t make a joke for this one, because I’m too sad at the thought of
someone having to explain the hard truth of reality TV

The day of the big event arrives, and we learn that the closest thing Lupin got to an actor is a flying samurai. Despite having what one might term a unique appearance, no one recognizes Goemon. No, not even Zenigata.

Were they distracted by the potential upskirt shot?

Alright, there’s minor inconsistencies and then there’s this. Zenigata, the man who likely could make a house out of the amount of data he’s collected on Lupin and his associates (which he will probably need, seeing as he certainly never has time to see the wife and daughter he theoretically has – which by the way, are really awkward to remember whenever Pops gets a love interest)? This guy doesn’t remember that Lupin has a world-class assassin and practitioner of an unbeatable sword style in his employ(/developing budding Stockholm syndrome)? WHAT?

But really, what? You can’t even use the ‘well, he just hasn’t seen him’ excuse. There’ve been at least two occasions (one of which was the very first episode Miyazaki worked on) where Goemon is in full sight of the inspector without a disguise. That is the kind of thing you notice when you’re the world’s greatest cop. Was it just too much trouble to say ‘hey, it’s an associate of that guy we’re hunting?’ to the cops under his control? Or has he just been spending too much time at HQ? Because that would definitely bring his brain cell count down a little.

This man is his boss, for God’s sake

And then he gets fooled by Goemon again about five minutes later, and – oh, plot happened before that. Okay, so the point of Goemon parachuting in and making a scene was so that Lupin and co. could film the reactions of the event organizers and see what they would instinctively try to protect, thus revealing the location of the paintings. This means they’re making a Sherlock Holmes reference, as that’s how the detective uncovered the location of the blackmail photos in “A Scandal in Bohemia” (albeit, sadly, with less samurai). The footage reveals that the paintings are in the pageant contestants’ wardrobe luggage, and the gang has to hurry to catch the boat of judges heading over to a smaller island to complete the sales (they are informed of this by Fujiko, because she’s been doing all of the actual intel work this episode while Lupin works on his GQ portfolio).

Being terribly clever, the animation even takes a minute to convince you that the pageant girls themselves might be the art. Or the line artist couldn’t show up to work that day, it could really go either way. 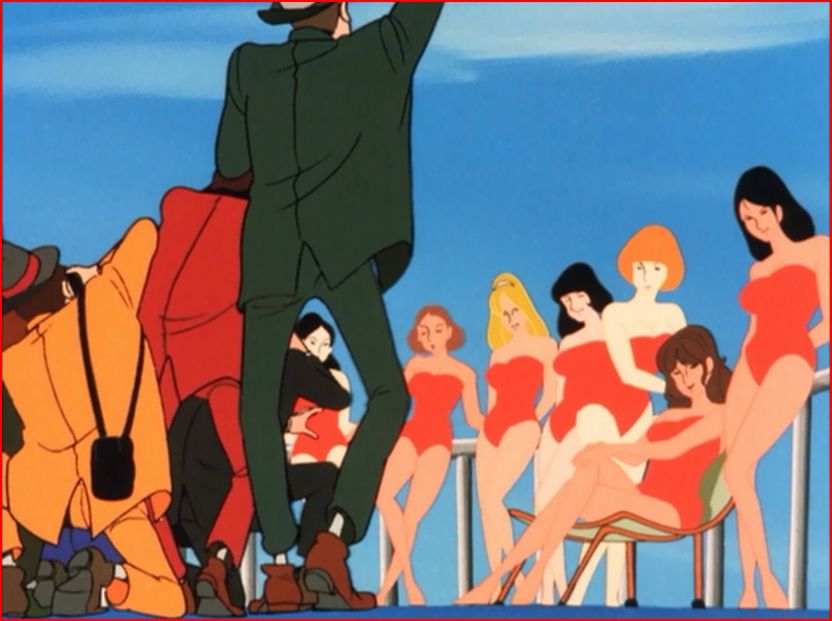 , it’s a metaphor for the ill defined standards of ideal beauty nonetheless rigidly enforced by society, and also that the animators ran out of time/money/shits to give

Oh, and about Zenigata getting outwitted by Goemon – we should take the time to make a hallmark of this moment, for it’s just about the only time we’ll see our samurai friend wearing something that isn’t just, at most, a change of clothes.

He looks so proud. It actually hurts my heart a little bit.

Clever, clever Green Jacket, pretending that the horribly mangled teeth of every character in this show is actually some kind of artistic choice. Goemon pretends to be a cop, telling Zenigata he needs to head back to HQ. Which, if I’m not mistaken, is in Japan. And somehow Pops still makes it back to arrest the art thieves before anyone escapes. I think the inspector can teleport.

Lupin’s plan to snag the art thieves is pretty typical as far as ‘fuck you’ plans go: he steers the ship with the paintings and pageant girls off course from the ship with the judges on it, giving him time to steal the paintings and put the girls into the wardrobe containers. When Zenigata arrives on cue, it looks like the judges are actually involved in human trafficking rather than art theft. This has to be my favorite Lupin plan for sheer subtle bastardry. Not only does he show up other criminals and get to prove how smart he is, but he potentially ruins them for life at a far more serious and morally repugnant crime than the one they’d actually been planning on committing, ensuring they’d wind up with a much uglier prison sentence than would’ve otherwise been due. Because they offended him, without directly doing so or knowing that they did in any way. It’s brilliant in its level of passive-aggressive evil – this is, perhaps, the closest-feeling Green Jacket Lupin to the one in Fujiko Mine. 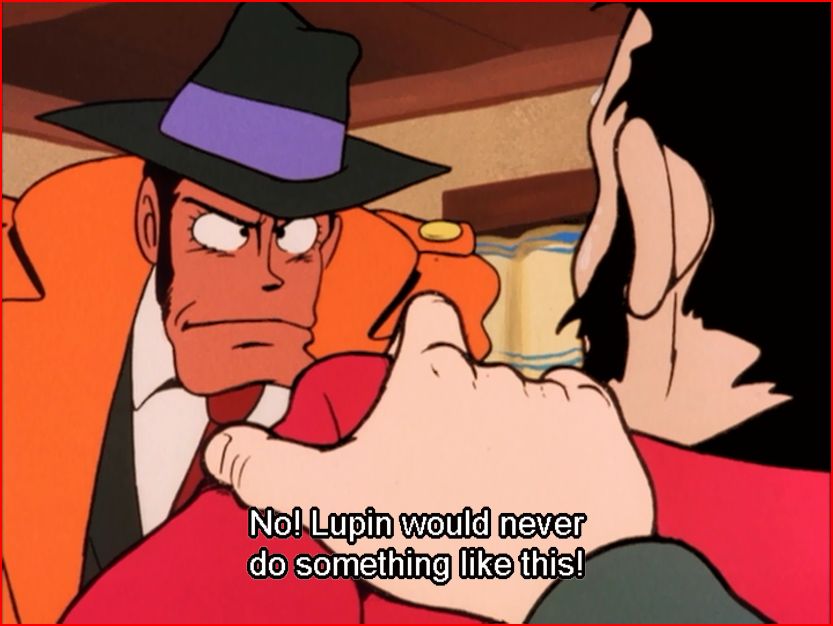 Bonus points for Zenigata defending Lupin’s honor – sure, he’s an internationally renowned thief with a body count into the hundreds, but he’d NEVER get involved in slave trade.
Aww, Pops

Of course, because we’re dipping our toes into the waters of the cuddlier Red Jacket Lupin to come, the thief comes by to reveal the truth of the matter (or, more likely, to show off his really awesome sail made up of stitched together priceless artwork). Zenigata breaks the fourth wall some more, and our heroes head off into the pacific. Presumably with some kind of plane waiting nearby, because that boat’s not going to make it all the way to the continent with its passengers still alive. Ah, lighthearted adventure by way of ruining priceless gems of historical artistic import (which is my way of saying – not a bad episode, though blessed with the brunt of the bizarre animation and without much driving motivation to the plot. More like Lupin wanders around explaining things in a self important manner until Fujiko comes along with the actually important facts they need to move the job forward). 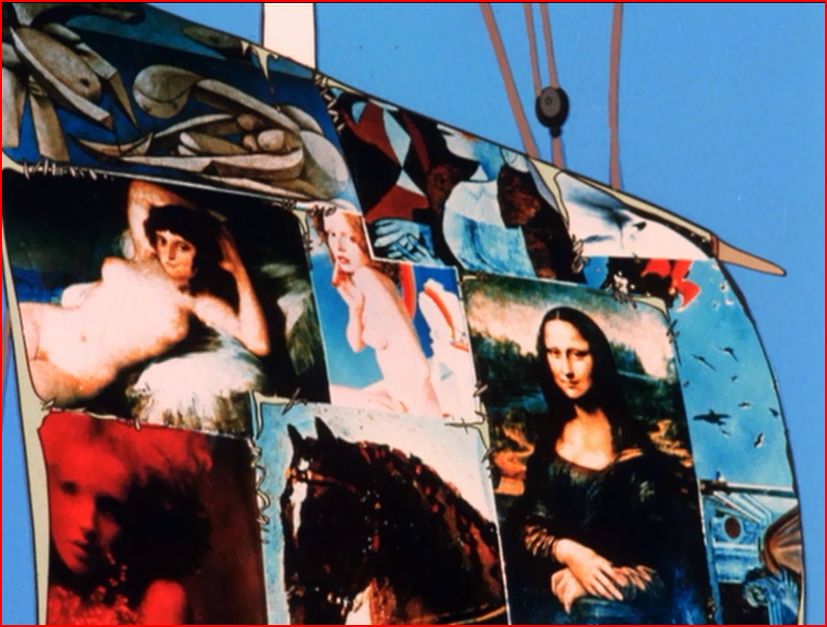 NEXT TIME: The show treads further into the waters of fanfic, not yet knowing how dangerous it’ll be for the series’ distribution potential. Now we have the descendent of Arsené Lupin’s rival. Because it’s easier than calling him the French Sherlock Holmes, though nowhere nearly as fun. Hope to see you there!