Revisiting Grave of the Fireflies: A Case Study of the Good Remake

In the 1980s Studio Ghibli was still getting its feet, and figured that the best way to do so would be by crushing its audience’s collective heart with one of the best anti-war films ever made. Thus was Grave of the Fireflies born, a film based on the semi-autobiographical writings of Akiyuki Nosaka. In brief the film follows two siblings, 14 year old Seita and 4 year old Setsuko, as they slip through the cracks of wartime society and slowly starve to death in the months before Japan’s surrender. I cannot possibly undersell the power and value of it as a film (hence why I’ve included the link), but the animated version is only really tangential to what we’re here to talk about today. What’s far more surprising is that there was a really, really excellent live action adaptation of the story made back in 2005.

Since we live in an age where the remake is one of those inevitable monstrosities of the creative process, it’s probably best to think not in terms of should there be a remake but how should that remake best be accomplished. I don’t mean that entirely as the pessimism it sounds like, either. Remakes are not unlike Darth Vader in the original trilogy – he was a force of hope and change that slid, through years and years (George Lucas) of small concessions into the evil and destructive force the galaxy knew him as. And even he was not beyond redemption. Putting aside my geeky metaphors, the reason the live action Grave (let’s call it Fireflies ‘05) works is because it examines a relatively undeveloped part of the narrative, and uses that expansion of narrative to develop themes that compliment, while also being unique from, the ideas of the original work. And while I wouldn’t dream of being presumptuous enough to analyze this film in terms of its importance to Japan’s cultural psyche, it speaks resoundingly enough on a basic human level to apply around the world.

In the original film, Seita and Setsuko’s mother was injured in a firebombing at the beginning of the story. With their father away on a Navy vessel, the only place the children can go to is their aunt’s house. Said aunt is, to put things as delicately as possible, the most heinous bitch I have seen depicted outside of an episode of Dynasty (or insert 80s soap opera of your choosing): she’s resentful of the children’s presence, berates Seita for not getting a job or going to school when he stays home to care for his sister, and gradually lessens their rations of food until the young and prideful Seita storms out (whereupon she seems disinclined to stop them). She’s the kind of cold, wicked caricature that would be more at home in a fairy tale than the painfully human tale she lives in, making for the one incongruent point in a film that stands effortlessly along Schindler’s List, Empire of the Sun, and Apocalypse Now in the pantheon of films detailing the horrors of war.

Which leads us back to that 2005 version: made to commemorate the 60th anniversary of World War II, Fireflies 05 begins with a modern teenager (and I am suddenly reminded of that Holocaust novel The Devil’s Arithmetic), who is watching her grandmother sort through old photo albums. Further still down in the box is the iconic box of fruit drops. And thus does the story travel back from its frame into the meat of things, showing us an Aunt (given the name Hisako) who started out loving her niece and nephew very much indeed. Like the wildly popular Wicked, it shows us an antagonist painted within a sympathetic tapestry – the difference is that it doesn’t particularly need to demonize or darken the world of the original story to make its antagonist more rounded.

Hisako, the 05 film takes great care to show us, is not an evil women. She’s very close to her cousin, Seita’s mother (a change from the original, where she’s related on the father’s side), and volunteers wholeheartedly to take Seita and Setsuko in after her cousin is caught in the bombing.

From there, the film is as much concerned with the ‘horrors of war’ element as its progenitor. But rather than the cruel, meaningless suffering of children, Fireflies 05 becomes a depiction of the endless slog of petty evils one commits to survive. Hisako is left with no support – her cousin is gravely wounded and dies soon after, her husband is killed in action, her brother leaves home, and she’s left to raise her own three children and two others while blocking out the judgmental stares of the community around her. Without a sense of community, by blood or no, there can be no humanity.

Even as Hisako tries to maintain decency, we see the suffocating, clutching atmosphere of the war closing in on her. And while still very much victims of the piece, the film’s not afraid to show Seita’s behavior as, well….prideful and childish. His refusal to go to school means no hope for a decent job or income to supplement the ever shrinking food rations, nor will Setsuko be parted with her mother’s ring once Hisako has sold off all of her valuables for food. These are entirely reasonable emotions for mourning children – but they are frustrating for an adult without the luxury of kindness. Suddenly we can understand how a woman becomes a monster when faced with death and threats on all sides. Before sitting in judgment, we now see how she allows children she loved to go to their deaths to better ensure the survival of her own blood. It is horrifying, heart breaking, and the logic of it is crisp in its painful clarity. 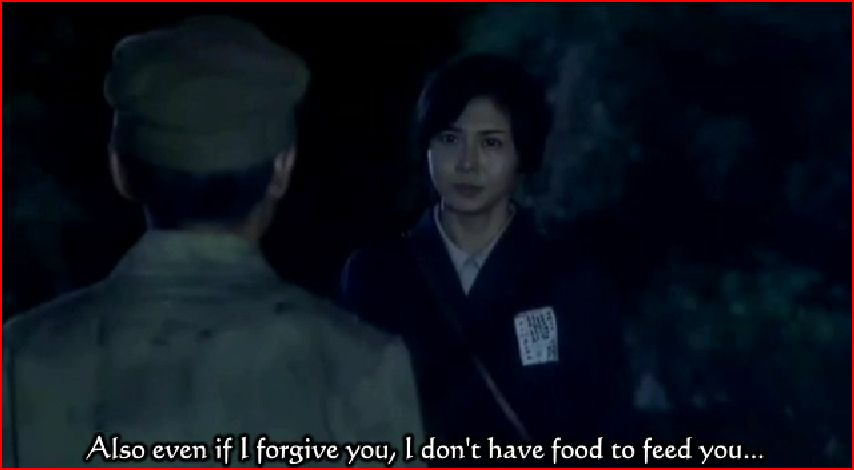 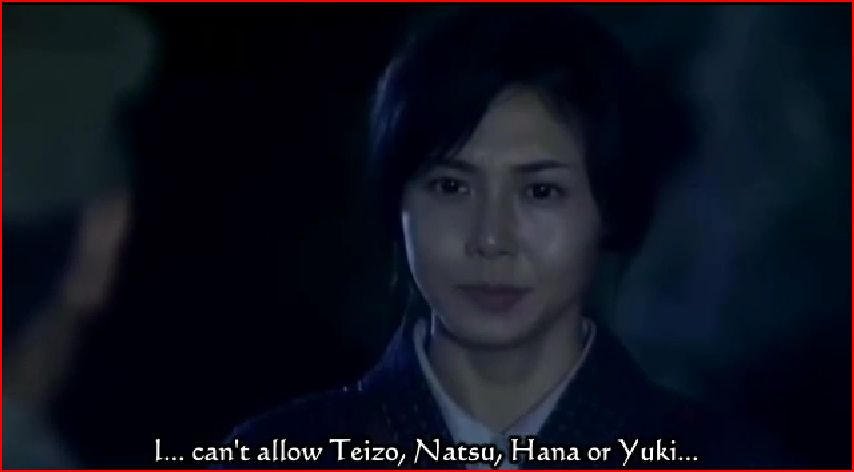 Worth it, if nothing else, for this chilling performance

Fireflies 05 isn’t particularly a perfect film – it’s limited by having the budget of a television drama (though it definitely works its buck as far as it can go, looking much nicer than a lot of its breed), and the frame narrative feels a bit cliché and has little more interest beyond being a reason to kick us into the better parts of the narrative. As a standalone film, it’s inferior to the 1988 animated film. But that’s the tricky thing about remakes: they never exist in a vacuum. Those that try to are doomed to failure before they even begin, and those that are callously dismissive of their source material ring empty and false. It’s not a matter of making it with slicker effects or younger actors, as if that will cement your way into a new generational heart. The very best remakes have conversations with their parents. They add to the story that was, and they weave in new considerations and concerns that will ring true to the era in which the remake is made. If they’re as good as this film, the act of making the remake goes so far as to enrich the original art when they stand side-by-side together. Let’s see JJ Abrams do that.

Tagged as: Analysis, Anime, Culture and Such, Grave of the Fireflies, Movies