Every last work ever written is derivative of something, and the 2013 Hero anime Samurai Flamenco is no exception. The problems start when that fact of fiction-writing is flung around as an insult. The flavor of debate this particular week is of the east-versus-west variety, not unlike when The Hunger Games was accused of being a Battle Royale rip-off for sharing superficial elements (and if that argument isn’t yet dead it should be, thanks to this articulately written article). That vicious battle of nerd subcultures has been seeing resurgence as of late, but in reverse. Many are the pointed fingers accusing Samurai Flamenco of being little more than Kick Ass The Anime. And on the surface, the reason for the comparison is obvious: both start with protagonists in realistic worlds who want to be like the heroes of their childhood fiction, become Totally Not YouTube sensations, meet female heroes with a more pragmatic and violent approaches to fighting crime, and eventually wind up over their heads when a threat much deadlier than petty thugs surfaces. The case isn’t looking good, is it?

But here’s the thing. Approach is everything. Kick Ass is a unique idea that is throbbingly pleased with its own cleverness, something that shows through every frame of its execution. The film (the comic being a rather more unpleasant Take That Fanboys creation) exists as a sort of hyper-real fantasy, one that pays its dues to the violence and nastiness of actual crime but just as often revels in them as a sort of spectacular, Sin City-esque carnival of gore (microwave guy, looking at you). At its heart, the movie is a fantasy dressed up in the clothes of real life, however many people they light on fire. And, pointed terminology aside, that’s fine. It makes it a unique fusion of escapist approach in an apparently naturalistic setting. Samurai Flamenco, from the position of the nearly-halfway point, seems to be taking a more meta approach of applying the trappings of fantasy to a realistic universe. It spends one quarter of its run developing realistic rules, reactions, and considerations for its world and characters, always prioritizing slice of life conversation and character development over Masayoshi’s heroic antics. It clearly wants the mundane to be at the forefront of the viewer’s mind, and it cements it there to blow it apart. When Nic Cage shows up in a fenced Batman costume it’s what we were all waiting for. When a guillotine gorilla shows up at a drug bust, the internet has to stop its head from spinning all the way around. And I think they did it on purpose.

I debated whether I should write this essay before the show was over, since criticism in media res more often than not turns out to be partly or wholly defunct rather quickly. But with the darker turn Flamenco has taken as of late and the uncertain grumbling among viewers, I felt a dire need to step in as its defense. This all makes total sense to me, because at the end of the day Samurai Flamenco isn’t Kick Ass. It has more in common with Puella Magi Madoka Magica.

Now, because comparing things to Madoka is the new “all roads lead to Evangelion,” let me explain. In most cases such a comparison would serve as shorthand for a longer tradition that does, indeed, lead back to Evangelion (and Revolutionary Girl Utena, and Princess Tutu, and so on). These are works that tackle large, existing genres with deeply set storytelling patterns and set out to twist them in order to point out flaws or fallacies in accepted fiction logic – i.e. Shinji Ikari being unable to instinctively pilot his Chosen One Plot Device when he’s thrown into it with no training, or the unusual combat sturdiness of Kyuubey’s magical girls stemming from their souls being disconnected from their bodies. There’s a fair bit of argument over whether Madoka counts as a deconstruction or whether it’s simply a dark interpretation of a classical magical girl story, but that’s an argument for another time.

What I’m absolutely NOT saying is that you should be deriding Samurai Flamenco for being a rip-off of Madoka instead. I want to use Gen Urobuchi’s pain-tastic horrorshow as a tool to set expectation by. Because I truly think Samurai Flamenco is sowing the seeds of something great, in its quiet character moments and meta and off the wall madness. It’s not perfect, Flamenco fans, but it’s going to be okay. We can observe what might come next, or at least what sort of show this might be, from pointing out a few key comparisons.

Both shows have openings that are divorced from the look and feel of the show. While this is not necessarily uncommon in anime, these two are unique in that the opening animations play heavily to what would be expected in a bog-standard version of the genres they’re examining. Madoka dresses in ridiculous outfits, is clumsy but determined, and flies around on a broom; while Masayoshi gets kitted out in full sentai warrior garb to fight a giant robot and save his suddenly damselized producer. They heavily manipulate the horizon of expectation that’s ubiquitous in sub-categories, where a genre title brings a checklist of seemingly necessary events that the viewer is (consciously or no) waiting for. Here, these shows say, are the things that happen in all those other shows. Let us not do them for a considerable chunk of our run, and when we finally do you’ll wish we hadn’t.

Both shows are marked by their sudden and alarming twists roughly a quarter of the way through the runtime (7/23 for Flamenco and 3/12 for Madoka). Until then they’d both been relatively lighthearted, while laying down nagging mysteries like Goto’s faceless girlfriend or Homura’s stalker tendencies. Also, they both reveal heretofore unseen enemy skills and prominently feature beheading. Mami’s, I think, comes across as more effectively planned because the show is so short – an “of course they planned it all along, look how quickly it came up!” sort of thing (and a to-then major character, no less!). But the amount of time is equivalent, even if the scenes are making subtly different points. Both raise the stakes, rip off the comforting veneer of the hero fantasy, and introduce the protagonist to a darkness they were sheltered from. 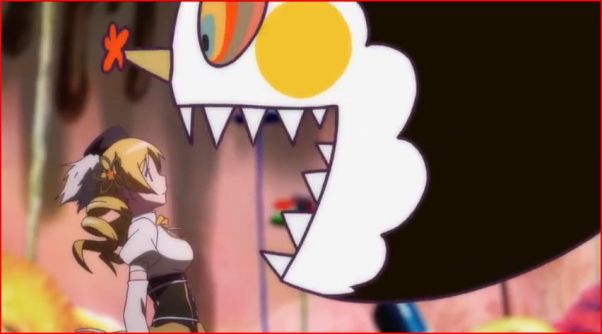 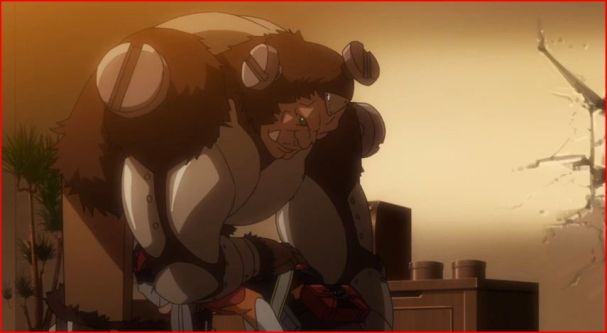 Do you have a joke? Because I still haven’t gotten past WHAT

The fact that the deaths in Flamenco WEREN’T named characters, but still manage to carry a feeling of weight, is a credit to how well the show pushed its mundane angle. It could easily have been Goto under (or even nearly under) the blade, but it isn’t about the shock value. It’s about the same little things the show has been looking at all along, the ripples that aren’t shown when showcasing the Oh So Special heroes on TV (civilians almost always make it magically to the distance, don’t they?). It’s an especially important moment for comparison because Masayoshi so quickly grows callous to killing via rationalization, a fact that’s been pointed out by several parties and is sure to lead to a nasty shock or loss. Goto’s not safe from the knife yet.

Not even the Eyes Wide Shut party would take this guy

Ah, Kyuubey. I’m pretty sure I’m not the only one who rewound the footage of his bullet-ridden body at least a few times. He’s like a successfully Kolinahr’d Spock, and the horror of his callousness is matched only by the nausea of some pretty sound logic – good of the few, or good of the many? It would be an easier argument to make if he didn’t initially technical-truth his way into to some uncomprehending agreements, but I digress.

It’s very difficult to make assessments of King Torture, what with the relatively little screen time he’s been given thus far. I suspect this section is in the most danger of becoming totally outmoded by the time Thursday rolls around. But let’s go with what we have, because it paints a rather Incubator-like picture.

His offer to Konno is also a contract, an offering of something he wished for that no doubt has some nasty strings attached – and his humanity might be the least of them. Is Torture bringing evil into the world of Samurai Flamenco? Or is h, like the Joker, filling a void? Is he the ‘excitement’ the complacent public gave form to, a la Persona 4’s Midnight Channel? It remains to be seen, but that there is a writerly plan in action I have no doubt.

So far we’ve seen Torture give several speeches from his undisclosed Layer of Doom. It would seem he has a giant cauldron for minion making, and a LOT of Samurai Flamenco dummies strung up in various positions. It brings to mind the many timelines of Madoka, but I don’t think we’re in danger of going down that road here. It does shade in some doubt as to the concept of Samurai Flamenco: was he truly just a story invented by Masayoshi’s grandfather? Or is there another puppeteer? And more interesting still is the heavy weight Torture puts on the role of Samurai Flamenco, and Flamenco specifically. He ignores the Flamenco Girls and Goto entirely in his challenges, and seems to view the conflict in terms of a distilled battle of good and evil. Only Masayoshi will do, and his role is as predetermined as the strict steps that came up to this point. His conversation is extremely meta regarding the nature of sentai shows as well (think Power Rangers, but Sailor Moon will give you the basic structural idea too). A quota of weekly monsters that have to be defeated before the final boss appears. A destined showdown between representations of good and evil, discussed at length while Masayoshi stands in a pile of DVDs laying out what’s expected of him. It’s possible that Torture is also an obsessed fan, a mirror image of who Masayoshi could become, but I’d lay my cards to the idea that there’s something grander at stake. There’s a very Cabin in the Woods feel to those lines, as if these are only shadows of something deeper and older.

As an aside, the meta’s pretty sharply bladed on both sides. The “torture is a means of communication” speech is chilling in context, but let’s look at it as genre commentary. What’s the bread and butter of at least two of the deconstruction shows I mentioned above? Emotional and physical suffering. We, the audience for these shows, come to crave it. We want to be entertained by it, convinced that seeing an individual at their lowest and most pained is a most effective way of understanding the human spirit. We are the fans who obsessively grab at something of interest, who discuss it and turn it over in our minds until there is nothing left. We, dear reader, are at least for the moment complicit. And while this arc might yet be resolved, spinning the show off into unrelated corners with unknown amounts of control, for these accusations I’d humbly beseech you to hold on. Samurai Flamenco wants to talk with us: about escapism, and heroism, and whether we’ve numbed ourselves to pain when we tell Shinji to get in the robot or expect our hero to shrug off death and pain and human softness. Because I think there’s an answer coming that’s not so black and white as this ultimate showdown. Don’t you want to see it?