The fact of it is that we exist in a post-Twilight world, whether you’ve bitterly resigned yourself or not. It’s not just the epidemic of sexy-monsters, which might’ve reached its peak with the cavalcade of conceptual madness that was the romantic zombie flick Warm Bodies, it’s all the insidious little tropes that come along with it: the main character who’s been made as bland as possible in order to better assist reader insertion, protagonists who switch between being infuriatingly passive and actively awful people, love triangles crowbarred into the plot contrivances-be-damned, and prose so purple you can feel HP Lovecraft stirring in his seafood-proofed grave.

For the record, I am fully supportive of Stephanie Meyer encouraging reading. That’s a wonderful thing, even if it came gift wrapped in a double edged sword of terrible role models. And to be doubly fair, these aren’t just problems that exist in YA fiction or even American fiction (more on that in a minute). But it doesn’t change the fact that I came out of those books wanting to murder the three main characters as violently as possible. Instead, we had to make do with a stomach churning happy ending with no actual climactic conflict (except in the movie, which promptly took it back), cream cheese and jam placenta eating, and a really creepy subplot wherein the spurned love interest decides he can just wait for her kid to turn legal (via being magically werewolf enslaved). This gnawed at me for a long time – me and the thousands of other authors who were spurred by the call of action ‘if SMeyer can get published, then ANYONE can do it.’

Years later a revelation came unto me. Acidic, stewing loathing is not the answer, my friends. School Days is. If there’s any genre more saturated with unpleasant people and tired genre tools than YA fiction, it’s romance anime. There’re a few good ones out there, really good ones even, but most fall into the same cookie cutter scenarios played out by paper dolls on sticks. Nowhere is this worse than the Harem genre. Behold: an ‘everyman’ type character, the audience surrogate, is thrust into an unlikely scenario where they’re surrounded by sexy specimens of the (usually) opposite sex; all of these mysterious beings are head over heels for the main character despite this person having no distinctive redeeming qualities or even memorable personality traits; and the potential love interests pretty much exist for the audience to ogle them, with the camera lovingly spending time on whatever was pegged as the marketable appeal. Sound familiar?

Harem anime (or any anime with a harem component) generally range from the benignly idiotic (Love Hina, Sword Art Online) to the jaw-droppingly exploitative and brain-dead (High School DxD, Ah My Buddha), with a few on the side that manage to twist something creative and heartfelt (and poke fun at) the concept (Ah! My Goddess, Ouran High School Host Club). 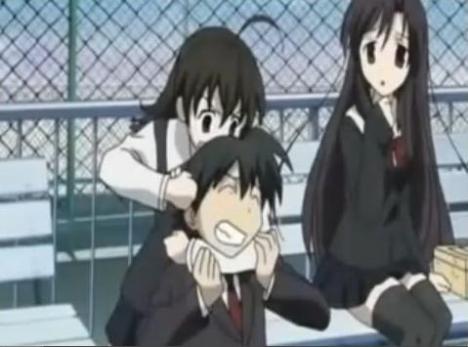 And then there’s School Days, which starts out playing itself as a romantic harem comedy and then takes an axe to the genre conventions with a gleeful bloodstained smile. I’m going to vaguely spoil the ending, just because without knowing how it’s going to come out no sane person would ever subject themselves to it. School Days stars centers around year high school student Makoto, who’s noted to have been a gentle and caring boy growing up. Presumably they tell us this repeatedly on the assumption we’ll buy it sight unseen. Makoto has a crush on Kotonoha, a shy and bookish girl who was cursed with large boobs and the ensuing teasing/staring/rumors of sluttiness that accompany them. Makoto’s childhood friend Sekai offers to play matchmaker. And, wouldn’t you know it, she’s got secret feelings for him. This quickly turns into a melodramatic love triangle seeking to outdo itself at every turn, eventually escalating into madness, requisite possible pregnancies, and Makoto sleeping with the entire female population of his class.

Let me not delude you into thinking this show falls under traditional definitions of quality. School Days is best enjoyed with friends, a bottle of strong liquor, and a healthy appreciation for the Mystery Science Theater 3000 approach to media. The drama outpaces even the weirdest of soaps with its contrivances and forced misunderstandings, the camera spends about as much time capturing cleavage (up top and below) as it does on the female characters’ faces, the art makes everyone look twelve years old, and the world of the story is populated by terrible people running on moon logic.

Also in this episode: rivulets of boob water much better animated than the conversations

What I will say is the story is weirdly compelling, and even as we laughed my friend and I watched ‘one more’ until the whole bloody affair was over in an afternoon. It’s the most fascinating of train wrecks, and at the time I thought to myself why on earth do I like this? It was the same baffled question I’d often put to guilty pleasure Twilight fans, and yet here I was. But I soon realized it’s because of Twilight that I was there at all. I owe it, because without my frothing hatred of forced love triangles School Days wouldn’t have been nearly as cathartic.

I’d say Makoto, Kotonoha, and Sekai are our Bella, Edward, and Jacob respectively, but that equivalency breaks down a bit. Mostly because Kotonoha is the singular sympathetic character and Edward removed the engine from his girlfriend’s truck so she couldn’t visit her male friend. But there are certain resemblances, or at least these three are pretty much the bog standard for love triangles these days.

Makoto, like most protagonists from adapted h-games (think a choose-your-own-adventure story, but with porn) looks as bland as possible and initially has a personality to match. He’s the dreaded ‘nice guy’ insert, a nothing-special sort of dude who lucks his way under many, many skirts. He’s also a stuttering, self centered, indecisive mess who prolongs the show’s main conflict by steadfastly refusing to just break up with Kotonoha. Change out ‘kind’ for ‘adorably clumsy’ and ‘self centered and indecisive’ for…actually. Anyway, he’s Bella. He’s also a pretty savage deconstruction of the mentality that pervades these sorts of fantasy stories: it’s all about the self insert, and the love interests warp everything they are to cater to that person’s whims. Makoto seems to downright expect these things, taking Kotnoha places he likes on their first date despite her discomfort, whining about how considering another person’s feelings is a pain, and coming just short of forcing himself on everything with boobs if given an inch. Interestingly, he gets the girl within two episodes, something that many shows would drag out until the last breaths of the story. He then finds that there’s more to a relationship with another person than his fantasies, and all he can think of after is how he can get out to something that’s ‘easy,’ and he uses girl after girl in an attempt to comfort his own selfishness.

What do you mean I can’t publicly grope you on the second date?

Because it’s a heterosexual dude fantasy versus Twilight’s heterosexual chick one, the focus is different (overt sex versus implied sex coded as vampirism), but the satire holds pretty well regardless. Bella stands around waiting to be fawned over, rescued, and saved from a life where she might have to be eew-old and make her own decisions; while Makoto stands around waiting for every girl he decides he wants to fall at his feet and expect nothing he doesn’t feel like giving (spoiler: it’s his dick). 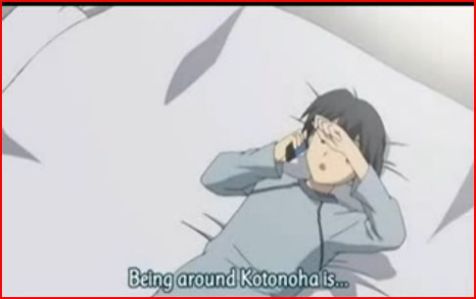 If only Makoto had seen Lars and the Real Girl, we might have avoided all this

And while it may perhaps be hypocritical, his being a gender-swapped Bella makes wanting to see his comeuppance a much more comfortable experience. Maybe it shouldn’t be – violence is never the answer and shouldn’t be glorified, so on and so forth. But it nonetheless pushes the story into gleeful revenge rather than uncomfortable glorification of very real, very common (often sexualized) violence against women. Makoto is a safe space to enjoy our secret wish of Bella not making it back from her cliff jumping. Or maybe that’s just me.

Sekai, like Jacob, takes longer to claim her Horrible Person award. Her end goal from the start is to date Makoto, but she gets increasingly backstabbing and manipulative in the process of getting there. She encapsulates the supporting but pining best friend archetype while also being Regina George from Mean Girls. It doesn’t take long for her to wring out any sympathy the audience might’ve had for her and leave them in a twitching state of retribution-lust.

Kotonoha would be a way better vampire than Edward

So, what does this all amount to? It’s not uncommon to see School Days pegged as one of the worst anime ever, and on the surface it is. The writing is terrible and clichéd, the characters resemble nothing like people, its female characters are broken down into a series of juicy meat parts by the camera, and the actual production values aren’t much to write home about. In the end, enjoying the show really depends on your feelings about the type of story all of this is stemming from. It’s petty, cruel, and blindsides the viewer with its tragic ending after 12 episodes of badly told, hackneyed drama. All the way through there’s an edge to the exploitation that is pseudo-graphic and also repellent, here represented by the most disgusting makeout scene of all time.

The first and last time I was on Sekai’s side

But that’s also the trick of it. So many series, novels, and films play the first 11 episodes of this disaster straight, and expect their audience to silently accept warped relationships and unsympathetic protagonists as if it were a romance we should all aspire to. They peddle emotional porn while slyly helping the viewer ogle the flesh on display (male or female). And School Days does all that, right up until it doesn’t. Like Spec Ops: The Line (with the very necessary caveat that SO is much more smartly written, and more deliberate in its choices), it suckers in viewers of a genre and confronts them with the nasty implications that are so often ignored: that the only people who would act as mindless dolls waiting to fulfill someone else’s desires, with no dreams and hopes of their own, would have to be completely psychotic; and that there’s more to a relationship than trying to push what you want on another person, and anyone who would expect that is probably pretty scummy.

Makoto and co. might all be blown up to extremes, but there’s more than a grain of truth in the common character types on display. A fantasy is fine, but pretending that fiction has no effect on reality is shortsighted and plain untrue. These sorts of stories, the Twilights of the world, can affect the expectations and desires of their fans, particularly if they’re inexperienced. We’ve got to ask ourselves what things appeal to us and why, and what it might incite us to do.

Also, did I mention the catharsis? Because the last episode is pretty much everything I ever wanted from a bad love triangle plot. It’s delicious. But I’ve been told I’m not quite right upstairs.

Whatever makes you happy, sweetie